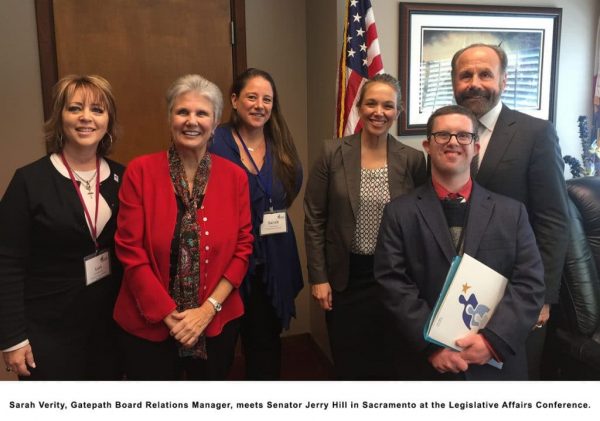 I was very proud to represent Gatepath at this year’s Legislative Affairs Conference run by the California Disability Services Association (CDSA), a statewide association representing nearly 100 community-based organizations that provide services to support and empower people with disabilities and their families.  At the conference, providers from across California came together to discuss legislative matters that relate to our work and visited state legislators to express our collective concerns.

Recently, the Assembly met to discuss the DDS budget. Assembly Member Jim Wood (D-Healdsburg), seconded by Assembly Member Devon Mathis (R-Visalia), moved to reject the Governor’s proposal to re-implement the uniform holiday schedule. However, due to technical procedural rules, the item remains open until the May revise hearing. This adds an extra layer of difficulty for providers like Gatepath because we are preparing next year’s budget now.

As we approach our 100th anniversary in 2020, all of us at Gatepath understand the critical importance of being a voice for those we serve, and proactively working to secure a sustainable safety net of services for individuals with disabilities for the next 100 years.

Please join the effort by signing up for our advocacy action alert network at PledgeForInclusion.org and lend your voice.