The Testimonials: A first hand perspective on bullying from parents and children

The Testimonials: A first hand perspective on bullying from parents and children

Stories ripped from the headlines from parents on their child’s experience with bullying:

“My daughter is a wonderful, adorable, sweet child with Down syndrome. The bullying she encountered started in elementary school and has followed her to middle school. Everyone makes a big deal about their children being bullied at school and it is a big deal. However, it is always the ‘normal’ children that you hear about. Who stands up for the children who are like my daughter? What about those children who have to deal with bullying and count on teachers and bus drivers to stand up for them because they can’t speak up for themselves?” – Mother of an 11-year-old girl with Down syndrome

During the course of this report, AbilityPath researched several high profile media reports involving bullying and a child with special needs. The emotional and physical toll these parents and their children face serve as only a small representation of a much larger population. It is estimated that nearly 85% of children with special needs experience bullying. We encourage you to read their stories and more importantly share your own. Only through strength in numbers can we “Step Up to Bullying.”

Kevin Kaneta was born with cerebral palsy, a neurological disorder that affects body movement and muscle coordination. During an interview with a Denver, Colo. television station, he shared his experience as a bullying target since the third grade, and each year, it gets worse.

“They go after me because they see me as a vulnerable target,” said Kevin. Kevin walks slower than most children and drags his feet because of his disability. His mother, Tyleen Wilson, fears for his safety each day at school. “I worry if he’ll come home today,” said Wilson. “What if they really hurt him?”

Wilson stated she’s notified school administrators, as well as the Colorado media, that her son’s classmates have tripped and pinned him down and force fed dog food into his mouth. In late December 2010, Wilson noticed a Facebook picture that enraged her. It was of Kevin with his hooded sweatshirt tied tightly around his face.

“I thought it was a joke,” she said. “I prodded Kevin to tell me about the picture.” Kevin’s classmates had tied his sweatshirt tightly around his face and forced him to walk around the playground, barely able to see through the small opening. After taunting and teasing, the kids ripped the sweatshirt off, cutting his eyelids.

Another picture showed Kevin against the playground fence trying to break free. Both arms of the sweatshirt were tied to the fence post. “They just watched me struggle to get out,” said Kevin. “They put it on Facebook and now everyone knows it.”

Harrison Warren: Target of a cyberbully

Harrison Warren, age 13, is a young boy with special needs. He came home from school and was very excited, telling his parents, Jeannie and James Wilson, that his friends at school created a Facebook fan page. Already, 50 school children joined as his “friend” and followed the activities on the Web page. To be a part of this online community meant a tremendous amount to Harrison.

Jeannie Wilson wanted to share in Harrison’s excitement and asked her son to share the Web page. What she discovered was not a compilation of “friends on Facebook,” but a digital portrayal that branded Harrison as a “retard.” The photos publicly ridiculed the middle school student who only desired to fit in and make friends at school. The students’ derogatory comments were easily shared online to their profile pages and social networks. One comment particularly frightened Harrison’s father.

“One child’s posting (read) ‘this page is, in fact, a hate group on Harrison because he is this way,’” said James Wilson.

Austin Avery’s premature birth resulted in the diagnosis of a developmental disability His differences with his peers and desire to make friends made him an easy target for bullies. His mother, Sharlene Avery, said the bullying of her child had gone unnoticed by adults for too long. In April 2010, Avery received a call from Austin’s school and realized immediately something terribly wrong had happened.

“We had a call from the school to come pick him up cause he was hallucinating,” said Avery. She placed him in the car and drove to the emergency room, where doctors told her something that she never imagined. Her son was intoxicated. “I just don’t understand how your child goes to school and comes home in a drunken stooper,” she said. “The doctor said that his blood alcohol level was way over the legal limit. Now, can you imagine a 14-year-old child and what kind of damage that can do to his brain?”

The Signs: What every parent should know about bullying

The hospital then notified authorities. Avery immediately tried to take action at the school, where she believes bullies had spiked her son’s drink.”One of the little kids had told us, ‘Ma’am, they have been poisoning him ever since January.’ And we were like, ‘Are you serious?’ All I can do is just ask ‘why, why?’” said Avery.

While waiting to hear from officials, Avery says that she’s afraid of what could happen next. “What everybody doesn’t understand is that it’s my child today, but it could be their child tomorrow. And if this stuff is not stopped, somebody’s gonna die because my child almost died.”

Chatari Jones: Bully on the bus 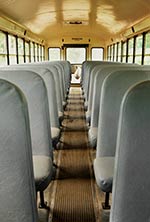 “I’m thinking, I’m going to talk to the bus driver; that was my initial intent.[But] I’m seeing the bus coming 20 minutes late, people just yelling and arguing and hanging out of the windows. It was chaos — no control. And I was like, ‘How am I supposed to put my daughter, standing here crying, on this bus?’ “ – James Jones

The video of a father charging onto a school bus to defend his middle school daughter with cerebral palsy against bullies became national news in fall 2010. Appearing on NBC’s “Today Show,” Chatari Jones and her father James Jones, told co-host Matt Lauer that she started to worry about the bullying a week prior to her father’s confrontation on the bus. She eventually told her parents in fear the situation would just get worse.

Chatari had begun to emotionally shut down just days after starting sixth grade. Her dad realized it wasn’t until he waited for the school bus with his daughter, that it was the students on the bus that were making her life “a living hell.”

The Law: Parents’ rights in the combating bullying

“As the involved parent of a child who suffers from cerebral palsy, it broke my heart,” said Jones in a statement released by the Associated Press. “When I walked my daughter to the bus that morning, she broke down in tears and finally told me about the bullies who had tormented her on the school bus. She was afraid. I did not intend to ‘go ballistic’ on the alleged bullies, but when the bus pulled up to the curb, I witnessed ‘a bus gone wild.’”

Though she started the “Today Show” interview with a smile, Chatari broke down in tears when sharing what she had to endure on the bus. “They would poke me with pens, call me all kinds of names, spit in my hair and throw condoms at me on the bus,” Chatari said sobbing.

Tyler Long: A life is lost to bullying

“I met with multiple teachers and principals several times each year to complain about the bullying.” – Tina Long

Tyler Long’s diagnosis with an autism spectrum disorder (ASD) caused unique personality traits that made him unpopular in school. His mother, Tina Long, says being different made him a target of bullying. Classmates took his things, spit in his food and called Tyler names.

“Tyler was very fixated on rules,” she said. “If someone talked in class, I know that he would say ‘you’re not supposed to be talking. That’s the rule.’ I’m sure this innocent fixation led to some of the bullying.”

The Teachable Moment: Opportunities in the classroom to educate

On October 17, 2009, 17-year-old Tyler’s battle with the bullies led to a tragic end. Depressed, he hanged himself before school and committed suicide. It devastated his family and engulfed a community to seek answers.

Shaniya Boyd: Kicked off her crutches

“She is only 8…she just wanted to get away from the bullying.” – Geneva Biggus

Geneva Biggus says that her 8-year-old daughter with cerebral palsy, Shaniya Boyd, tried to jump out of a window at school. Shaniya told her that “she just wanted to get away” after she was teased, kicked in the forehead by a boy and knocked off of the crutches she needs to walk.

“Three people were fighting me; two girls and one boy. The boy kicked me in my forehead for no reason, and then they hit me,” Shaniya said. The abuse had been going on for some time and Geneva stated that “the school did little to stop it.”

“They tried to separate them and put them in different classes, but it still happened in the hallway or cafeteria or outside when they had play time – stuff like that,” said Geneva. “They still managed to get their hands on my child.”